Gaelic has been spoken in Scotland since around the sixth century AD. Prior to that, the language spoken in Scotland was Pictish, about which almost nothing is known. Gaelic was brought to Scotland by migrants from Ireland, who displaced the earlier Pictish population, or in any event the Pictish language. These migrants also brought with them Christianity. The early Gaelic arrivals included the Celtic saint, St. Columba, known in Gaelic as Colm Cille, who established the famous abbey at Iona.

Gaelic was at one time spoken throughout the whole of Scotland, with the sole exceptions of the Northern Isles (Orkney and Shetland) and possibly the tip of Caithness. The evidence for this is indisputable. It is that place-names of Gaelic origin appear throughout the map of Scotland, from Stranraer in the south-west to Kinlochbervie in the far north and back over to Carnoustie in the east.

Gaelic in the European language family

Gaelic is a Celtic language. Its closest relation is Irish. Indeed, Irish, Gaelic and Manx were originally all the same language, prior to diverging over the last 1,000 years (in much the same way as the Romance languages like French and Spanish diverged from their common ancestor, Latin). Other Celtic languages include Welsh and Breton.

Gaelic is thus part of a different language family to English. English is a Germanic language with a large overlay of vocabulary originating in French. This reflects the history of English, which was brought to the British Isles by the Anglo-Saxons, who were then conquered by the French-speaking Normans in 1066.

Although the Anglo-Saxons encountered Celtic-speaking peoples on their arrival in Britain, Celtic languages have left relatively little mark on English.

English is thus closer to most Continental European languages (German, Danish, French, Italian etc.) than it is to Gaelic. This means learning Gaelic presents something of a challenge for English speakers!

In this respect Gaelic is quite different from Scots. Scots is essentially English with some differences in vocabulary. It would make no sense to have a grammar of Scots, as Scots grammar is just English grammar. By contrast, Gaelic grammar is totally different. For example, English is a subject-verb-object language (the man ate the food) whereas Gaelic is a verb-subject-object language (dh’ith an duine am biadh = ate the man the food).

Notable features of the language

Gaelic has a number of interesting and notable features. One is that in Gaelic, prepositions combine with pronouns to form new words called prepositional pronouns:

In Gaelic unlike in modern English nouns have grammatical gender – they are masculine or feminine.

Gaelic also has noun cases. There are four noun cases in Gaelic, usually called the nominative, dative, genitive and vocative. Case in Gaelic affects the article and the adjective as well as the noun.

(Old English had both grammatical gender and case, but both have now disappeared from the language, which has undergone a process of radical grammatical simplification over time. The only remaining element of case in English is in the personal pronouns: I (subject) said to him (object), but he (subject) said to me (object)).)

There are also two forms of the verb ‘to be’, ‘bidh’ and ‘is’. Bidh (the present tense of which is ‘tha’) is used when describing; ‘is’ is used when defining. One cannot therefore in Gaelic use ‘tha’ to say your name or profession. One must instead say ‘Is mise Cailean’ (I am Colin) or ‘Se tidsear a th’annam’ (I am a teacher). 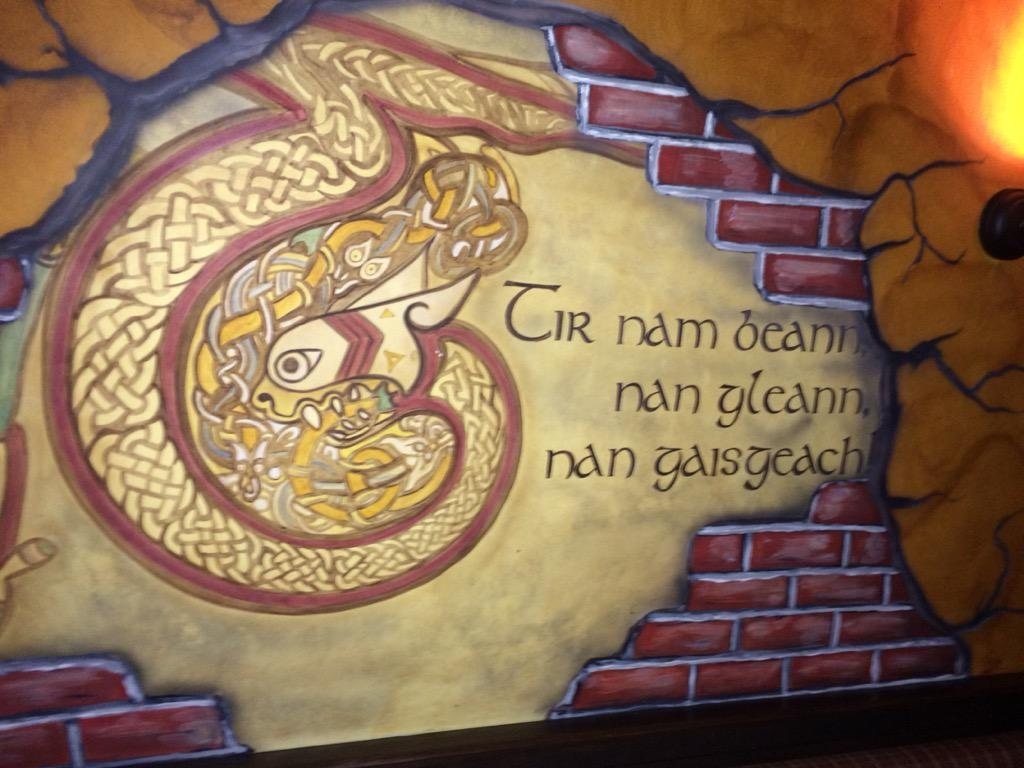 Another notable feature of Gaelic is lenition, where a consonant is softened or ‘aspirated’—in other words, it is not fully formed in the mouth. A lenited ‘m’, for example, is a ‘v’. A lenited ‘c’ is a ‘ch’ (as in loch). Lenition in written Gaelic is shown by adding an ‘h’ after the consonant. Lenition is present in a variety of situations in Gaelic, in some of which it affects the meaning of what is being said. Hence the catchphrase: Gaels of the world, lenite!

Whereas it is common in European languages for the endings of words to change, in Gaelic the beginnings of words often change. For example, to form the past tense, the initial sound of the verb root is lenited. The verb ‘sing’ in Gaelic is ‘seinn’. To say ‘I sang’, one would say ‘sheinn mi’.

However, as well as the beginnings of words changing in Gaelic, sometimes the endings change, and sometimes the middles as well! For example, ‘the hair’ in Gaelic is ‘am falt’ in the nominative case, ‘an fhalt’ in the dative case and ‘an fhuilt’ in the genitive. These are pronounced (approximately) ‘am falt’, ‘an alt’ and ‘an ool-tch’.

The Gaelic alphabet has only 18 letters, but Gaelic has a number of sounds that do not exist in English, such as the vowel sound ‘ao’ (in words like caol) and the consonant sound ‘dh’ (in a word like dhomh). There are likewise sounds in English which are absent in Gaelic (such as the glottal stop).