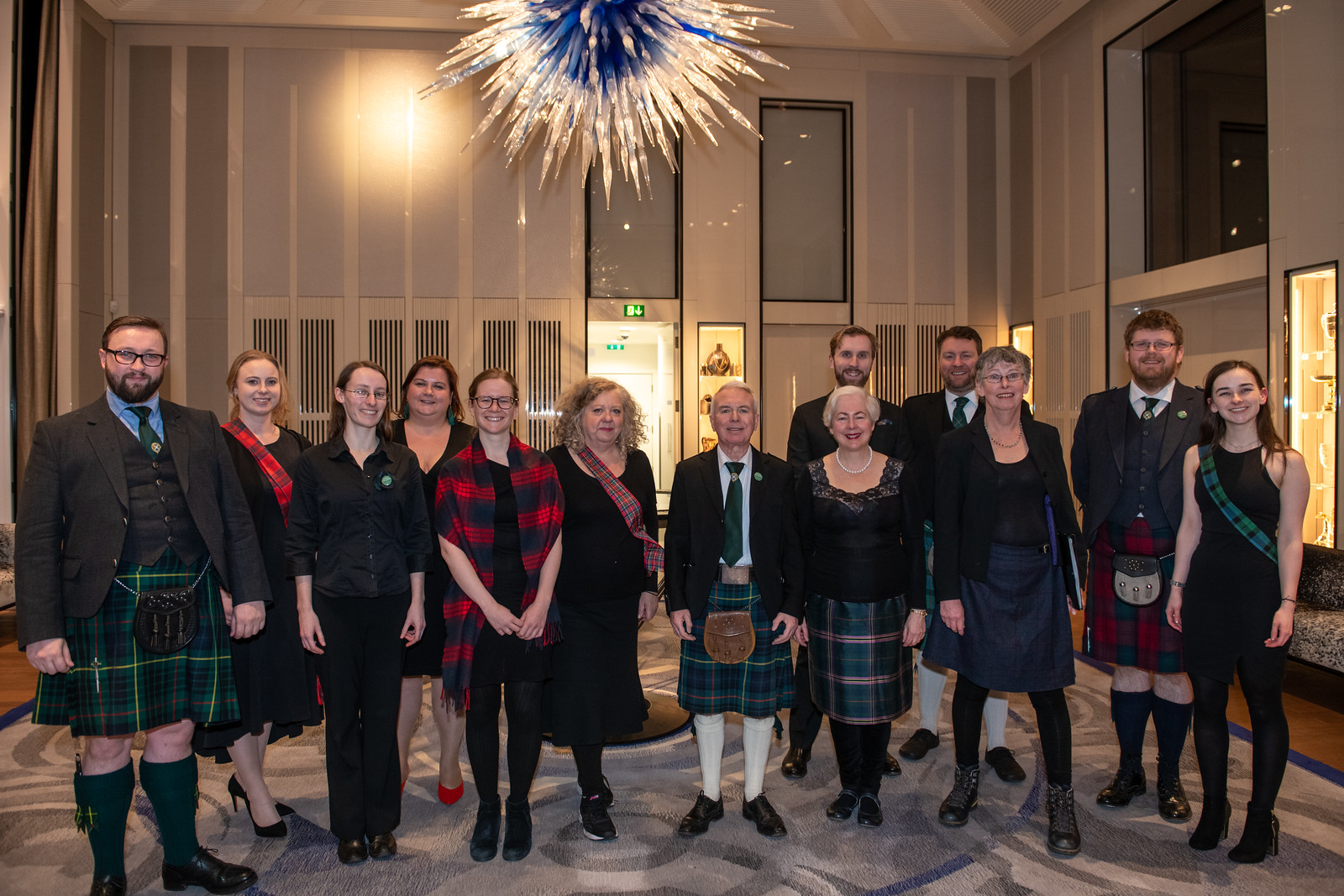 This week, the London Gaelic Choir gave a performance in one of the City of London livery halls. Colin West reflects on the occasion.

The London Gaelic Choir is a venerable institution. It traces its origins back to 1891 making it, indeed, the oldest Gaelic choir in the world. However, by contrast with the City of London livery companies, it is a mere stripling. This week the choir was invited to sing at a dinner of one of the livery companies, the Farriers, which took place in the hall belonging to another one, the Leathersellers’ Hall, just off Bishopsgate in the Square Mile. The City livery companies have their origins in the mediaeval guilds and thus are very venerable indeed: the Leathersellers received their Royal Charter in 1444. 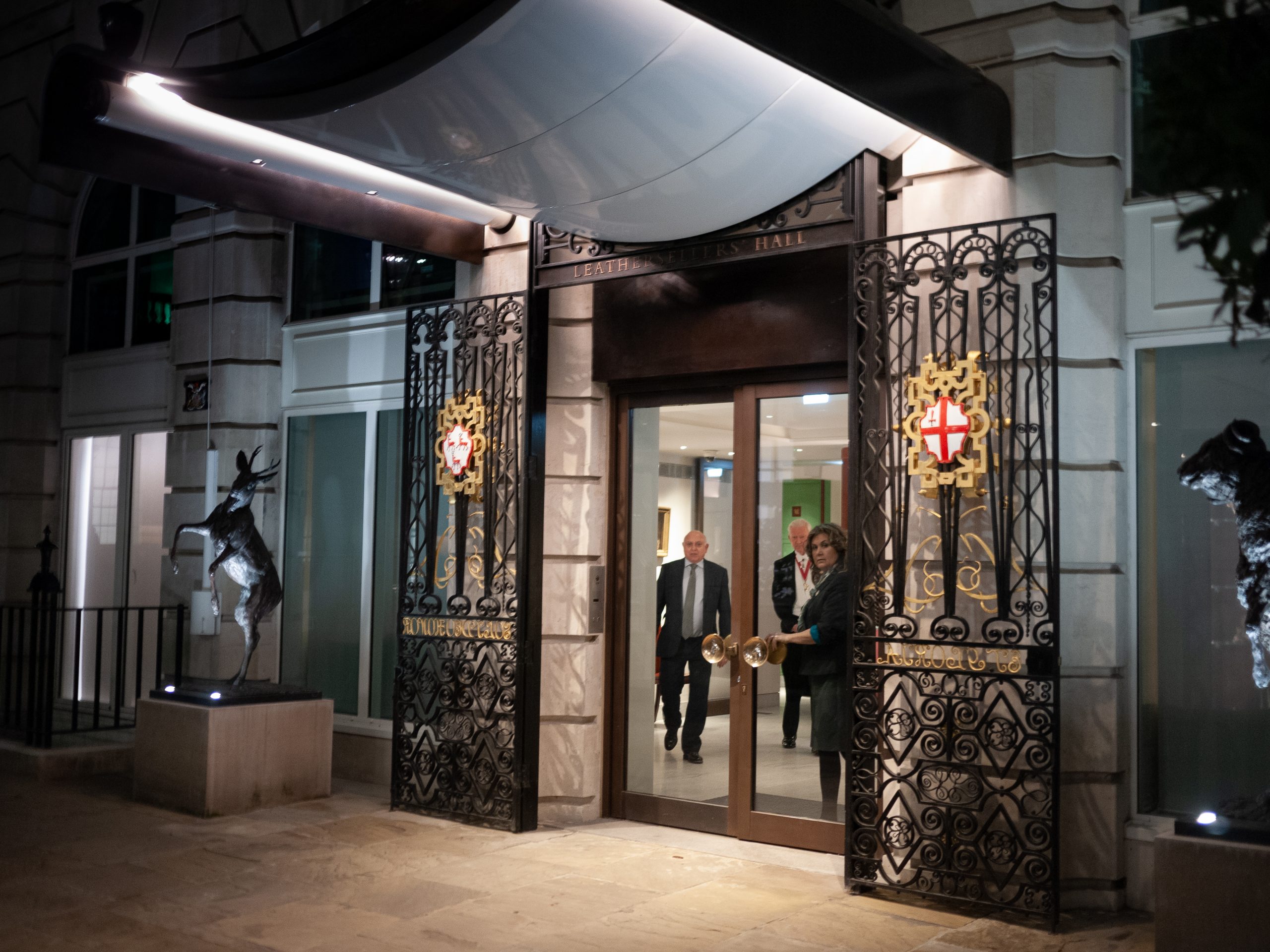 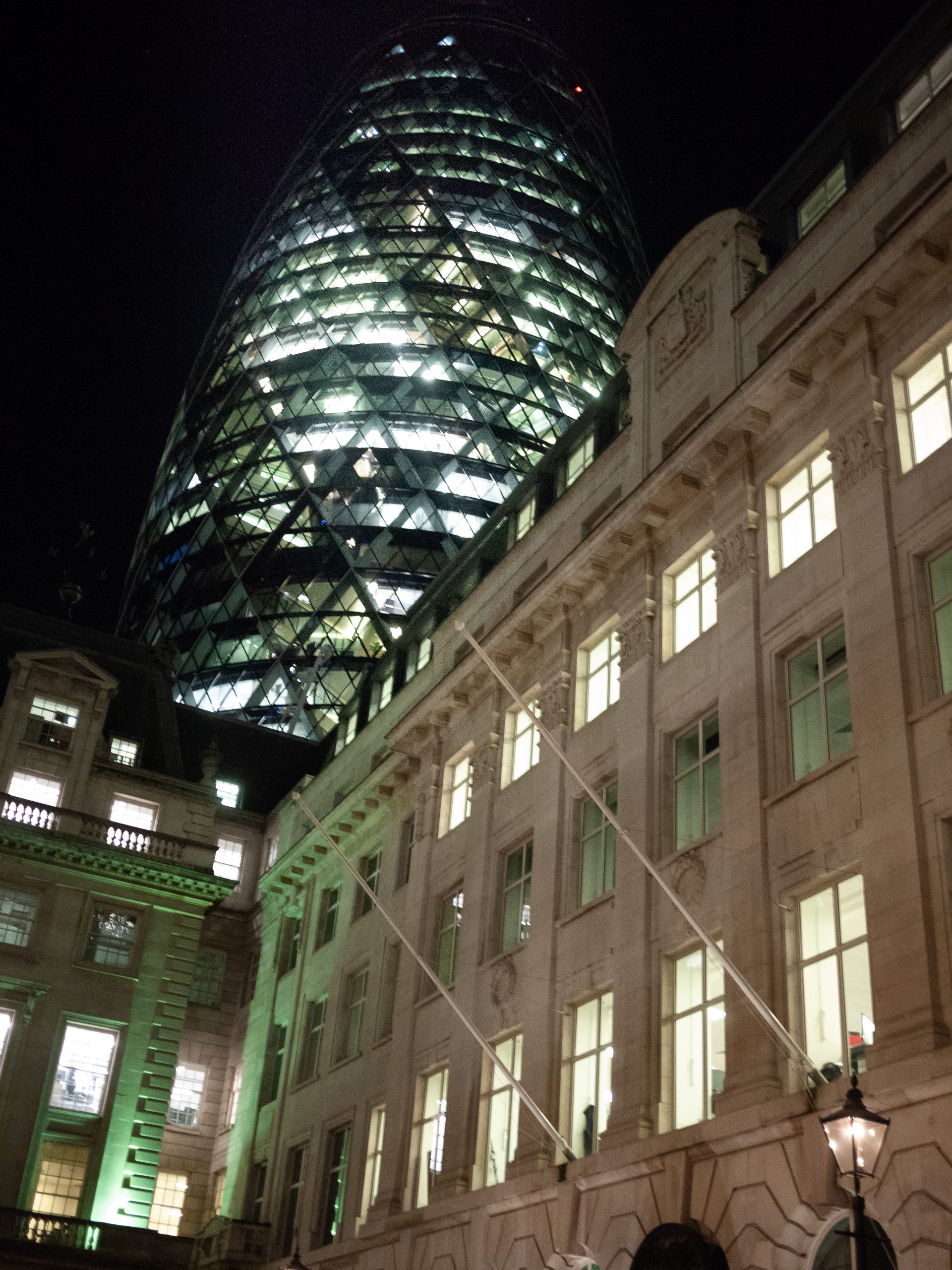 Entrance to the Leathersellers’ Hall, in the shadow of the Gherkin.

The mediaeval guilds acted as what we would recognise as a form of combined trade union and regulator for the trades to which they belonged. The guild system had some apparent benefits. It provided training to apprentices and upheld quality standards, whilst ensuring that its members could make a living by preventing prices from falling too low. However, these benefits had equal and opposite downsides: dampening price competition so as to inflate the prices of staple goods, and blocking innovation. The guilds could not survive the advent of import-export commercial capitalism or mass-manufactured goods. They were essentially associations of artisans. That being so,  they are perhaps due a return, given the hipster-ish interest in all things artisanal nowadays. Perhaps there should be a Craft-Brewers’ Hall, or even a Worshipful Company of Baristas?

Be that as it may, the City livery companies are now divorced from their origins as guilds of craftsmen and traders. They now do charitable works, including in some cases running schools, but for the most part operate as dining clubs for the great and the good of the Square Mile. Which was why the choir was there. We were invited to be the after-dinner entertainment for a dinner of the Farriers. The link is that the current Master of the Farriers is Steven Wilson, who comes originally from Lochaber, and who invited the choir to perform some songs in the local language of the country of his birth. In his honour, the choir included the song Gleann Bhaile Chaoil amongst its repertoire for the night, together with some other Gaelic choral favourites. Our performance appeared to go down well, although a performance of Mongolian throat-singing would no doubt have been met with the same polite appreciation. 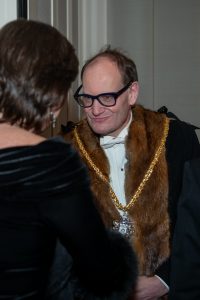 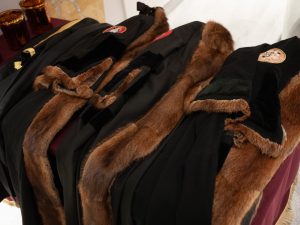 (Left) The Master of the Farriers greets a guest. (Right) The Farriers’ robes with their animal-hair trim.

The Leathersellers’ Hall is probably the most opulent venue in which the Choir has performed in recent memory. The liverymen’s gowns included animal-hair trim—presumably horse-hair. The walls of the Hall were ‘papered’ with leather and the Hall itself is a mixture of ancient material, such as stained glass, and modern architecture, with no expense spared. The Hall’s historic library was maintained in what appeared to be refrigerated glass cabinets. The loos were quite the best-appointed in which your correspondent has had the pleasure to change into his Highland garb. 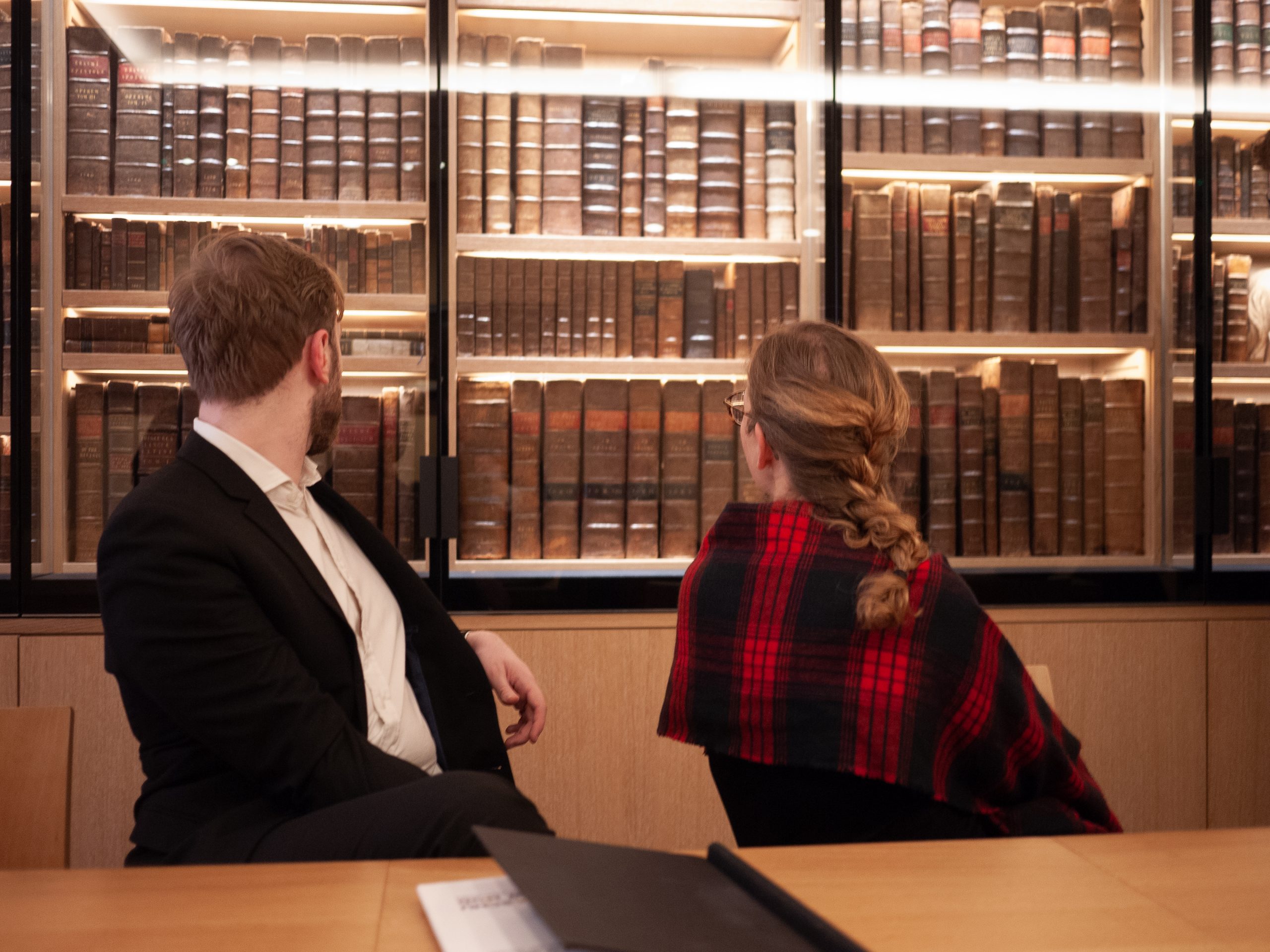 But for all that, it struck me that we Gaels must never allow ourselves to become like the livery companies. The Leathersellers’ Company has within it no actual leathersellers; and the Farriers’ company no farriers. By contrast, our Gaelic societies and choirs are bearers of a living tradition and a living language. We must never allow “Gaelic” to be just the label on the box; or allow the language to disappear from our cloisters. 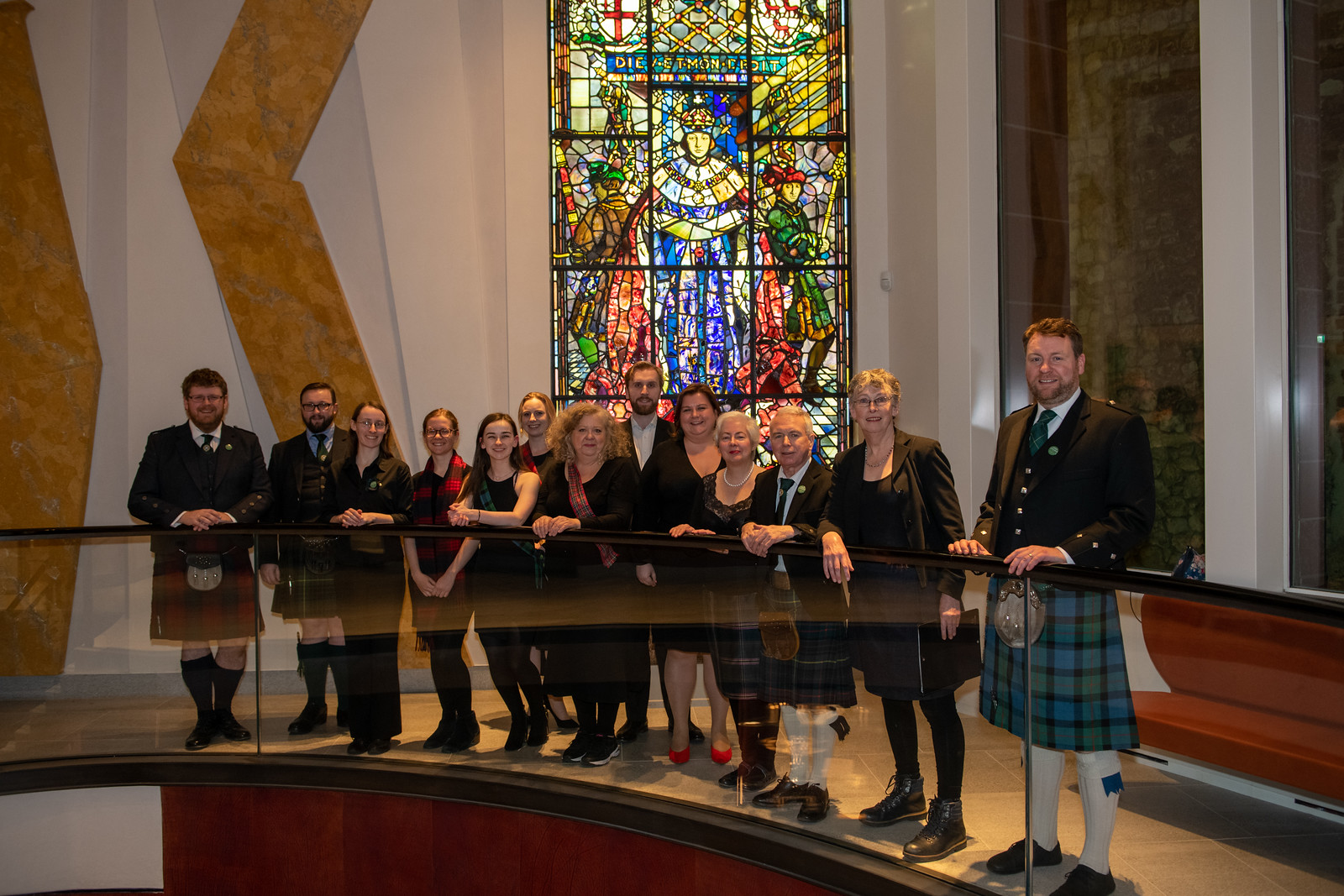 Postscript: After the above article was posted, we received a tweet from the Master of the Farriers’ Company pointing out that whilst the connection some livery companies have with the trades they originally represent is purely historic, the Farriers’ Company is in fact the examining body for farriers and has many active farriers as members (and that the Leathersellers’ Company also supports its sector). We are happy to correct the record! The tweets are below. 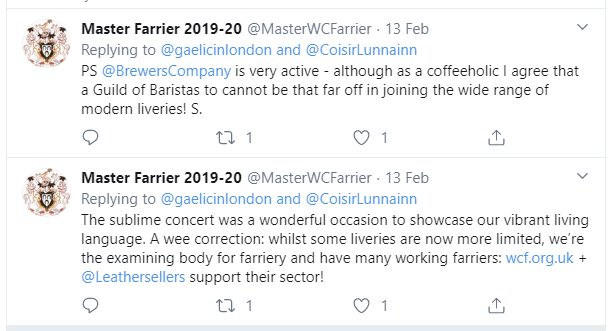